​SUSTAINABLE VILLAGE PROJECTS
IN NORTHEAST REGION OF TURKEY
🇹🇷Türkçe
​﻿﻿PRESERVING DIVERSITY, HEALING MOTHER EARTH
BUILDING SUSTAINABLE COMMUNITIES﻿﻿​
​The projects took place in Kars Province of Northeastern Turkey under the hospices of Anatolia Foundation, founded in 2006 in Berkeley, California. The Foundation is discontinued as a non-profit since August 2021. Its projects continue to impact the region as an alternative source of income due to the efforts of local farmers and NGOs.

The goal of the projects was to partner with rural communities to revive endangered crops and traditional, artisan skills.﻿﻿ These alternative income sources were designed to help promote sustainable living in villages and counter-balance the effects of heavy out-migration to distant cities. ﻿ The projects were funded by The Christensen Fund, S. Francisco, CA until 2012. An additional small grant was received from UNDP GEF Trust Fund, Turkey.

WHERE IS ANATOLIA?
Anatolia is a geographical region encompassing the whole of Asia Minor. It forms the Asian terrain of Turkey, bridging Asia with Europe. 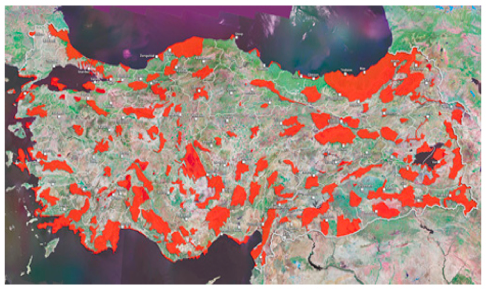 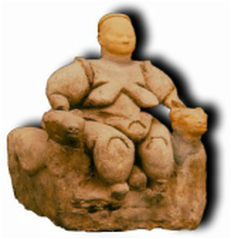 Kybele, Fertility Goddess 6,000 B.C. Museum of Anatolian Civilizations, Ankara, Turkey
Tulips, irises and many other popular garden plants originated here. Wheat, barley, chickpeas, almonds and many other important food crops were first domesticated from the wild in Anatolia’s fertile soil. In these days of accelerating climate change, Anatolia remains a critically important source of genetic diversity. However, though this region harbors some of the most important ecosystems in the world, it is also one of the most endangered.

MISSION AND GOALS
Anatolia Foundation projects helped empower village life and economics by building bridges between traditional wisdom and contemporary science; between conservation and marketing; between people and their unique environment.  The founders believed that sustainability can be achieved by an integrated, holistic approach to all aspects of village life, which results in new understandings, skills and alternatives that can be transformed into new opportunities.

MAIN AREAS OF ACTIVITY
*Anatolia Foundation has discontinued its non-profit status and does not accept donations. This website is for information purpose only.